Dulac was a prolific illustrator and designer. His works include Stories from The Arabian Nights (1907) with 50 colour plates; an edition of William Shakespeare’s The Tempest (1908) with 40 colour illustrations; The Rubaiyat of Omar Khayyam (1909) with 20 colour plates; The Sleeping Beauty and Other Fairy Tales (1910); Stories from Hans Christian Andersen (1911); The Bells and Other Poems by Edgar Allan Poe (1912) with 28 colour plates and many monotone illustrations, Princess Badoura (1913) and many others.

Sinbad (or Sindbad) the Sailor is a fictional mariner and the hero of a story-cycle of Middle Eastern origin. He is described as hailing from Baghdad during the early Abbasid Caliphate (8th and 9th centuries A.D.). In the course of seven voyages throughout the seas east of Africa and south of Asia, he has fantastic adventures in magical realms, encountering monsters and witnessing supernatural phenomena.

The tales of Sinbad are a relatively late addition to the One Thousand and One Nights – they do not feature in the earliest 14th-century manuscript, and they appear as an independent cycle in 17th and 18th century collections. Traceable influences include the Homeric epics (long familiar in the Arabic-speaking world, having been translated into that language as early as the 8th century A.D., at the court of the Caliph al-Mahdi), Pseudo-Callisthenes’s “Life of Alexander” from the late 3rd/early 4th century A.D. via the 9th century “Book of Animals” of al-Jahiz, and, even earlier, in the ancient Egyptian “Tale of the Shipwrecked Sailor”. Later sources include Abbasid works such the “Wonders of the Created World”, reflecting the experiences of 13th century Arab mariners who braved the Indian Ocean.

Presenting the illustrations from Sindbad, the Sailor. First edition, published in 1914 by Hodder & Stoughton, London. 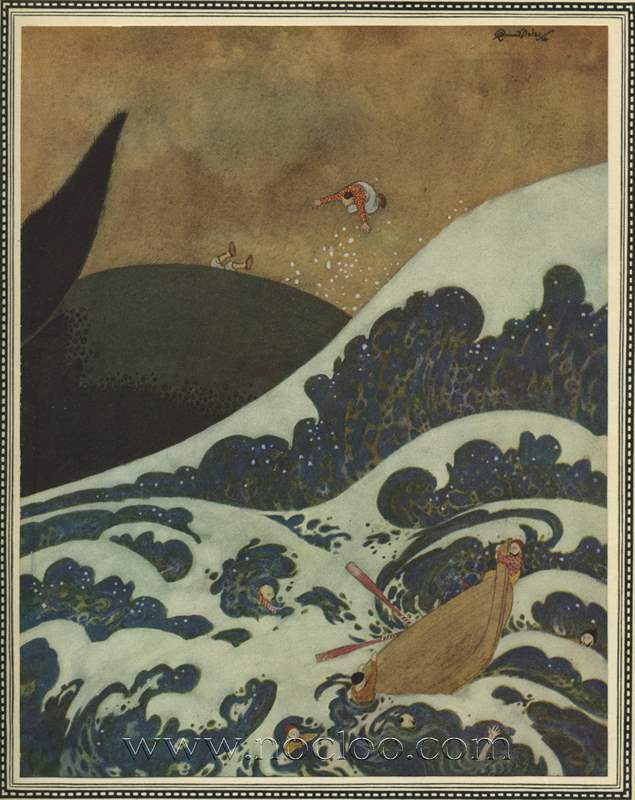