Roberts Brothers, Boston 1870. Little Women, complete in two parts. 12 mo, two volumes in the original brown cloth with gilt titles and decorations to the spine and front panel, each volume illustrated with four plates including frontispiece; those in the first part created by the author’s sister. Edgeworn, head and tail of spine heavily chipped. Sunned spine, light foxing on some pages. Tissue guards present. Binding tight. Overall a Good copy of this rare set.

Louisa May Alcott was born in Germanstown, Pennsylvania and spent most of her life in Massachusetts. Educated by her father, the philosopher and writer, Amos Bronson Alcott, she began writing to help support her family. She too, like her heroine Jo, wrote stories for pulp magazines under a male pseudonym. The illustrations were by her sister May, upon whom the character of Amy was based. In 1865, while serving as editor of Merry Museum, a Boston children’s magazine, Alcott received encouragement to write a book for girls.

Drawing on memories of childhood, the author portrayed the daily lives of Amy, Jo, Beth and Meg March–portraits of the four Alcott sisters. One of the most popular juvenile books ever published, “Little Women is an outstanding achievement of 19th-century American literature, and the first children’s novel written in that country to have become an enduring classic.” “It is one of the first fictional texts for children to convey the difficulties and anxieties of girlhood, and. suggests that becoming a ‘little woman’ is a learned and often fraught process, not an instinctual or natural condition of female development” (Foster & Simon, 87). Published separately in consecutive years, the first part of Little Women “did not sell at first. Part Second was therefore also issued in a small edition, but it went like wildfire, and pulled Part First along with it” (Grolier 74). The original issues of each part are therefore quite rare. Each volume is illustrated with a frontispiece and three plates; those in the first part of Little Women were created by the author’s sister, May. 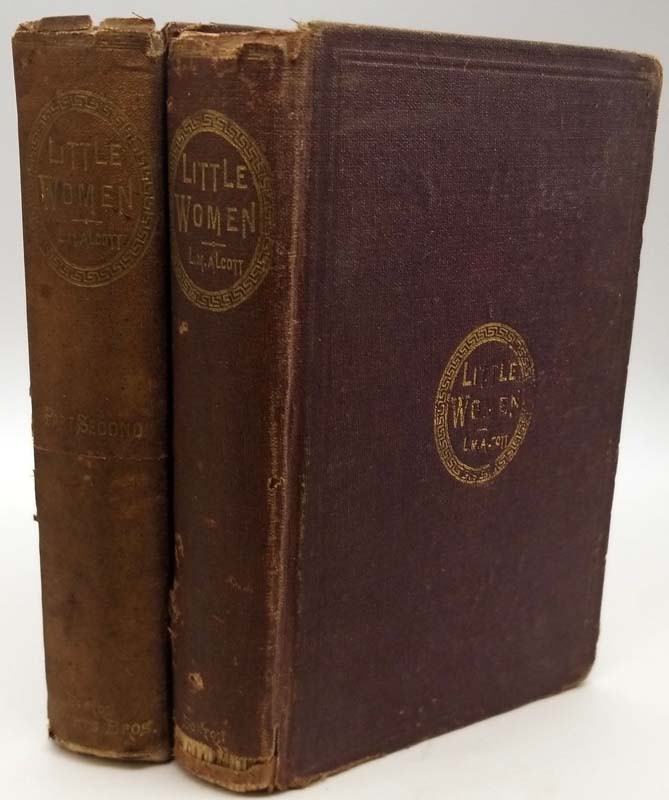