Although the pos­sessive phrase “Kay Thompson’s Eloise” appears on the front cover of the Eloise books, it would be hard to imagine the stories of the little girl who lives in New York’s Plaza Hotel being half as successful without the contribution of Hilary Knight. Knight is the son of artist-writers Clayton and Katharine Sturges Knight, active in the 1920s and 1930s. A 1930 painting by Knight’s mother, showing a young girl with a saucy atti­tude and stance, influenced Knight s own artistic creation of Eloise.

Kay Thompson created the idea of Eloise, a bratty, loquacious six-year-old, but it was Knight who gave Eloise form. After meeting Thompson in the mid-1950s, Knight sent her a Christmas card of a little girl named Eloise rid­ing with Santa. Soon Thompson and Knight were collaborating on four books about Eloise and her adventures with her nanny her dog, and her pet turtle. The success of Eloise (1955), Eloise in Paris (1957), Eloise at Christmastime (1958), and Eloise in Moscow (1959) led to a big blitz in Eloise merchandising.

Knight was even commis­sioned by the Plaza Hotel to paint a picture of Eloise that to this day adorns the first floor (al­beit a second edition, as the original painting vanished after a rowdy fraternity convened at the hotel). The collaboration between author and artist ended, however, after Thompson withdrew a fifth Eloise book because she felt the Eloise phenomenon had become too big. Knight would sometimes come into the studio in the morning and find his rough sketches meant for a fifth volume, Eloise Takes a Bawth, destroyed by Thompson. Soon after, the three sequels to the Eloise books were withdrawn from publica­tion, and only the first book could dearly dem­onstrate Knight’s talent in personifying the spoiled little girl.

Hilary Knight may be best known for his black-and- white line drawings with limited color for Eloise (pink, blue, and yellow — all used separately for the different books) or for his illustrations in several of the Mrs. Piggle-Wiggle books by Betty MacDonald, yet his full-color artwork show­cases Knight s full talent. His ability to capture the childlike fairy world is most notable in The Owl and the Pussycat (1983), in which two chil­dren gradually are transformed into the title characters.

Although he effectively conveyed a sense of landscape in the Eloise books, with the swirling snow in Eloise in Moscow and the quiet splendor of the sidewalk cafes in Eloise in Paris, the books that Knight has authored introduce fictional landscapes most children can appreci­ate more than the daily life of a rich girl let loose in the Plaza Hotel. In Knight’s landscapes and drawings, adults are relegated to the fringes and the child’s imagination holds sway. The full­-color art in Knight’s Where’s Wallace? (1964), The Twelve Days of Christmas (1981), and Cin­derella (1981) trace his artistic development.

In the late 1990s, the estate of Kay Thompson released the three Eloise sequels, which had been out of print for more than thirty-five years. Eloise at Christmastime was reprinted with a new cover by Knight, as well as some additional new illustrations within the book. The reprints renewed Knight’s popularity, and many of his other books were also re-released, bringing his artwork to a new generation. 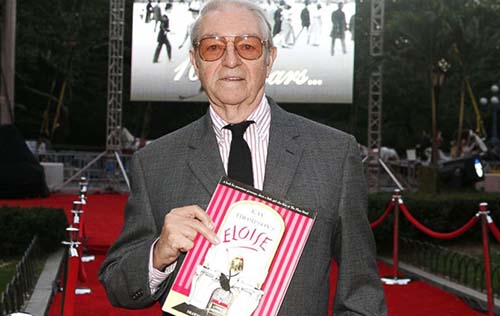