Chris Raschka’s bright colors and ener­getic characters have established him as one of today’s foremost children’s book creators. The son of history professors, Raschka was always drawing as a child. Though he majored in biol­ogy at Saint Olaf’s College in Northfield, Min­nesota, Raschka eventually parlayed his talent for illustration into editorial cartooning for a small newspaper; He eventually moved with his wife to New York City in order to gain more op­portunities to illustrate children’s books.

Chris Raschka’s love of jazz inspired his first pic­ture book, Charlie Parker Played Be-Bop (1992). Breaking out of traditional picture book treat­ment of biography, the book’s loose narrative structure draws the reader into the cadence and rhythms of Jazz music. Raschka’s scraggly line drawings of Parker and his saxophone skillfully convey the spirit of the legendary musician rather than producing an exact replica of Par­ker’s features. Bright colors and surreal land­scapes — including marching lollipops, disem­bodied legs with dancing shoes, and jazzy birds — reflect the style of Raschka’s subsequent books.

Chris Raschka similarly jettisoned realism for a subjective style in order to capture the feelings and experiences of young children in Yo! Yes? (1993)* This Caldecott Honor Book depict the conversation of two young boys, one black and one while, who form a friendship. The Joy of breaking through sadness and boredom is con­veyed with a maximum of two words per page, mimicking the way young children sometimes communicate. Spare imagery and economic lan­guage focus the reader on the excitement of new friendship. A similar style pervades the compan­ion volume, Ring! Yo? (2000), which follows the same two characters as they talk, argue, and then make up during the course of a perfectly de­picted juvenile telephone call. Provided with only one side of the phone call, the reader must imagine foe rest of the conversation. (An “explanation” is given at the end.)

Themes of loneliness and friendship are also explored in like, likes, like (1999), in which a cat is left: alone by a group of animals who have all paired off. The cat wanders the countryside until he finds a friend: a fellow cat. Waffle (2001) con­tinues the theme of foe lonely outsider, with a different outcome. Instead of finding a friend, the title character discovers his special talents and strengths so he can quit “waffling.”

Chris Raschka has also illustrated work by other authors. His geometric backgrounds and tradi­tional yet forward-looking drawings of children complement Margaret Wise Brown’s posthu­mously published Another Important Book (1999)- Swatches of patterned fabric added to paintings illuminate the poetry collection A Poke in the I (2001), edited by Paul Janeczko. Raschka’s handwriting and artwork bring to mind Ezra Jack Keats’s The Snowy Day in Happy to Be Happy (1999), an ebullient celebra­tion of African American girls and their hair. In 2006, Chris Raschka won the Caldecott Medal for the book The Hello, Goodbye Window, written by Norton Juster . In all of Raschka’s work, the bright, lively drawings and unique narrative style have an enduring ap­peal. 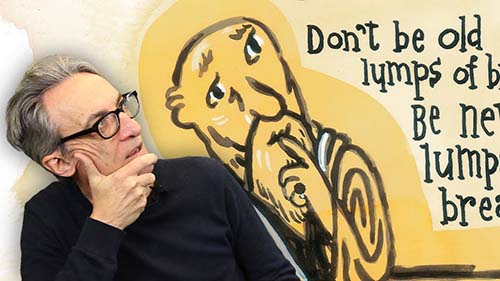