One of the busiest art­ists at work in the field of children’s illustration during the 1930s, 1940s. and 1950s, Helen Moore Sewell had a lifelong interest in depicting the world around her that was rooted in early travel experiences. By the age of sev­en, Sewell had circumnavigated the globe. She cited such disparate images as volcanoes glowing in the night, camels near the Suez Canal, and the varying colors of the oceans as stimulating her first artistic tendencies.

Helen Sewell spent a portion of her early childhood on Guam, where her father was governor. Orphaned at the age of eight, she lived with a large, extended family that provided her lifelong support and continuous contact with children, which was essential to her career as an illustrator. Sewell was the youngest student to be admit­ted to art classes at Pratt Institute in New York City and continued to study art intermittently, including a stint with the Russian sculptor Aleksandr Archipenko. The result was Sewell’s distinctive, highly stylized illustration technique, which often utilized hard-lined ink sketches, no shadowing, and close-in focus on characters.

Helen Sewell first earned her living as a designer of Christ­mas and greeting cards. Her stark black-and-white drawings, often with highly detailed content, became her trademark when she began illustrating books for other authors in 1924. More than sixty assignments fol­lowed. Her work appeared in books by such authors as Carol Ryrie Brink, Alice Dalgliesh, Lang­ston Hughes, Elizabeth Coatsworth, and Frances Clarke Sayers.

By 1932 Sewell had illustrated nine books and she was asked to produce art for Laura Ingalls Wilder’s Little House in the Big Woods. She continued to illustrate two more “Little House” titles, but was eventually in such demand that Mildred Boyle assisted her for the remainder of the series. In her art, Sewell usually drew from memories of familiar land­scapes and children within her family circle and only occasionally used live models. For the “Little House” ‘ books, she consulted photographs of Wilder’s family.

In addition to illustrating children’s stories, Sewell provided drawings for many adult books, including works by Emily Dickinson and Jane Austen. Sewell’s own writings and compilations were self-illustrated, starting with ABC for Everyday (1930). Among the other books she wrote and illustrated are Blue Barns: The Sto­ry of Two Big Geese and Seven Little Ducks (1933), Peggy and the Pony (1936), Jimmy and Jemima (1940), Peggy and the Pup (1941), and Belinda the Mouse (1944). In 1947 Sewell collaborated with Elena Eleska for Three Tall Tales, stories based on Eleska’s experiences in Asia and Africa. The book was innovative in its use of comic­strip-style graphics.

Throughout her career, Sewell’s illustrations appeared in a number of award-winning books, including the Caldecott Medal Honor Book The Thanksgiving Story (1955) by Alice Dalgliesh and five “Little House” titles, all of which were Newbery Honor Books.

Helen Sewell’s work was best known from the 1930s through the 1950s. Her body of art makes her an interesting his­torical example of children’s book illustration during that era. 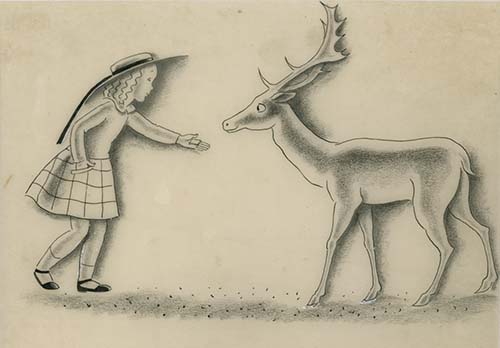