Pamela Lyndon Travers was as un­willing to “explain” herself as a writer as she was to explain the staunch and unbendable charac­ter for whom she is so well known — a British nanny in a 1930s household. Mary Poppins was published in 1934 and has since been translated into twenty-five languages and sold copies in the millions.

It was the basis for a 1964 Disney film that had tremendous success despite its lack of favor with those loyal to the original book. Travers went on to write eight more books about Mary Poppins, including Mary Poppins Comes Back (1935), Mary Poppins Opens the Door (1943), Mary Poppins in Cherry Tree Lane (1982), and Mary Poppins and the House Next Door (1988). Critics have praised Travers for continu­ing to expand and explore her themes in the later books and for the enduring liveliness and unpredictability of her main character.

Mary Poppins has confounded critics over the years by being full of contradictions and im­possible to characterize in a few simple words. She has been called stern, vain, proud, no-non­sense, unsentimental. She has the complete loy­alty of her charges — Jane and Michael Banks and their younger brother and sister. In the se­ries of episodes that make up Mary Poppins, she takes the children on adventures that both de­light and amaze them. Whether she is gluing stars to the sky, having a tea party on the ceiling, or dancing under a full moon at the zoo, she leaves the children baffled and perplexed by her actions — never ceasing to deny that anything out-of-the-ordinary has taken place.

P. L. Travers drew her themes from a childhood rich in fairy tale and myth, a love of Shakespeare and the Bible, and later study of Eastern reli­gion and philosophy She grew up in Australia, daughter of an Irish father and a mother of Scottish and Irish descent. At eighteen, she trav­eled to England, determined to discover her roots — and made her home there. As a young woman she worked as a dressmaker, a dancer, an actress, and a reporter — first to help support her family in Australia after her father died and later to support herself in England, where she became established as a drama critic, travel es­sayist, and reviewer.

She also wrote poetry and was taken under the wing of the Irish writer-edi­tor George Russell, who published her work in the Irish Statesman and encouraged her literary growth and development for the rest of his life. Travers wrote several other children’s books, including I Go by Sea, I Go by Land (1941), The Fox at the Manger (1962), and Friend Monkey (1971), as well as adult books — Moscow Excur­sion (1934) and About the Sleeping Beauty (1975). Although these titles haven’t achieved the ac­claim or success of the Mary Poppins books, they continued faithfully to explore the themes and ideas that intrigued their author.

In her writing P. L. Travers has a strongly mystical bent; she often said that she didn’t create Mary Poppins at all; rather Mary Poppins found her way into Travers’s consciousness and demanded that her story be told. Just as the character of Mary Poppins has continued to occupy the mind and writings of Travers over several dec­ades, so the books have continued to be redis­covered by new generations of readers. 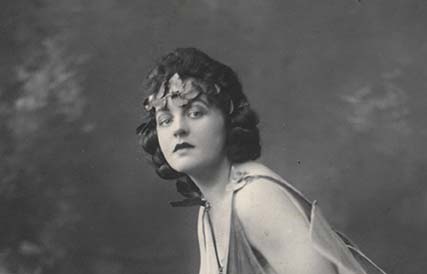