A striking element in the award-winning books Vera Williams creates is the wealth of strong female charac­ters. An active supporter of both peace and feminist issues, Williams writes about confident girls and women who live amicably with other people and with the envi­ronment.

Also expressed in her books is the holistic philosophy taught at Black Mountain College in North Carolina, where Williams earned a degree in graphic art. Keenly aware of interdependence, her characters strive together toward goals—as families, neighbors, and friends. Most prominent in her stories, though, is the emphasis on people and simple pleasures rather than on money and material goods.

Vera Williams, who was raised during the Great Depression, tells of families discovering beauty and joy in the simple things in life. Three Days on a River in a Red Canoe (1981), for example, describes a no-frills, but fun-filled, family vacation. When two young cousins are taken on a camping trip by their mothers, both knowledgeable campers and canoeists, they experience the inexpensive but rewarding adventure of the great outdoors. Another low-budget but exciting journey is described in String­bean’s Trip to the Shining Sea (1988), a joint effort creat­ed by the author-illustrator and her daughter, artist Jen­nifer Williams.

This innovative book is an album of the postcards and pictures young Stringbean sends home while traveling by truck with his older brother from Kansas to the Pacific. The unpretentious descriptions of the trip are down-to-earth and authentically child­like. In “More More More” Said the Baby: Three Love Stories (1990), gentle vignettes depict toddlers having fun, not with fancy toys but with family—a father, mother, and grandmother—hugging, playing, and kiss­ing. Exuberance and joy are depicted in this Caldecott Honor Book’s lively art that depicts African-, Asian-, and Anglo-American children and adults.

The sincere enjoyment of simple things is also evident in the trio of books about Rosa and her mother and grandmother, a close-knit, working-class family. In the first book, the Caldecott Honor Book A Chair for My Mother (1982), Rosa’s mom, a waitress, needs a comfortable chair in which to relax after work, so daughter, mother, and grandmother save coins in a big jar until I the long-awaited day when the jar is filled and the three can have the fun of shopping for the perfect chair.

In Something Special for Me (1983) and Music, Music for Everyone (1984), Rosa discovers the pleasures of music. The art in these and Vera Williams’s other picture books is unique and instantly recognizable. Multicultural communities and families people her stories, and spontaneity and energy—family love and deep joy—are all I expressed in the brightly colored illustrations. When Williams utilizes borders, they serve as extensions of the story rather than mere decorations. Though her art is reminiscent of children’s drawings and the appearance of her books is deceptively simple, together the pictures and stories evoke strong emotions that still move both young and old readers.

Vera William in her own words …

Those fairies that presided at my birth did not bring the gift of security. We had a struggle keeping jobs, family, and places to live. But I was given the promise that life, however rocky, would be an adventure. And just as my parents believed that material goods should be distributed equably, so they also believed in an equable distribution of culture and a chance at creative expression. Bread and roses. They found the free places where my sister and I might paint and sculpt, dance, and act. And that was a blessing, for I was a child with a lot to say. When people grew tired of my talking, I drew pictures. But then I had to tell about the pictures. Even with acting and dancing, I couldn’t get it all told.

I still can’t. Of course all stories aren’t equally important to tell. I distinguish between natural and synthetic stories, by which I mean something about the depth from which a story springs. I admit it’s a delight to make up stories and pictures, whatever their source. It flexes the muscles of the imagination. But it takes about a year for me to bring a book from its first shadowy glimmerings to a completed work in which each element is rooted in the tale to be told: type (sometimes hand lettering); paper; format; even the flaps and back cover. Naturally, I desire to embark only on projects with “serious consequences.” But “serious” most certainly includes the colorful, play­ful, and humorous.

Take my book Stringbean’s Trip to the Shining Sea. In it are the postcards and snapshots that String­bean Coe and his brother Fred sent home to their family from the long trip they made one summer in Fred’s truck. I did this book with my adult daugh­ter Jennifer Williams as co-illustrator. Despite rough spots, we shared the pleasure of a beguiling, childlike project creating stamps, picture postcards, postcard- ese descriptions of places, including a restaurant in a cowboy boot. We could have gone on inventing cards and stamps for years. I had, in fact, no ending for the story for a long time. Yet something of deep impor­tance to me was working its way.

Tied with a string in my drawer was a collection of postcards. I had sent them to my mother as I traveled across Canada in my late forties to make a canoe voy­age down the Yukon River. She too had traveled through the West when she was young. I knew the snapshots of her trip well, and I wanted to provide her with a vicarious trip for her late years. My canoe trip led to my book Three Days on a River in a Red Canoe. But more importantly, it was a prelude to the main adventure of my fifties and sixties: creating pic­ture books. I well remember a day on the trip when I turned down a hike to stay in camp and wash up. But my real desire was to be left alone with myself as sto­ryteller. I spent my time sketching equipment, mak­ing a storyboard.

I had had many adventures: parenthood, the orga­nizing of a cooperative community and experimental school, arrests in anti-nuclear demonstrations, jobs as cook, baker, and teacher. I had been caught up in nature study, canoeing, and hiking—and love. But the time had come to fill that other promise of my childhood, to somehow tell my stories.

My mother died when I was on the threshold of this career. I had told her I was on my way to being an author/illustrator. She had said, “Hurry up! I’m not going to five much longer.” After she died, I retrieved the postcards I had sent her. They became, in time, the mysterious engine of Stringbean’s Trip to the Shining Sea. My mother used to call me String­bean back when I was a skinny kid driving her crazy with my need to report on everything. In the book, Stringbean finally gets to “tell” until he is content with it. He has had his say, but still he longs for his parents to hang on to his every word. And he looks forward to all those marvelous things he might yet do and see. For him it was a true trip to his own shin­ing sea.

For me, its author and main character, it became a tightly condensed autobiography in which the enthu­siasms of my or my daughter’s life appear on the dif­ferent cards—a great device for an autobiographical novel in forty-eight pages! I had been helped in this by a study of the postcard tradition and its history. I saw that geography, history, personal events, and entertainment combined tidily on those little cards. I developed a friendly regard for the vanished writers and readers of the cards I read. Then, as I wrote my own cards, I began to fed that same affectionate bond with all the unknown readers-to-be of my and Jennifer’s made-up cards. Now when I sign the book for people, I sometimes write, “Have your own won­derful trip to the shining sea.” 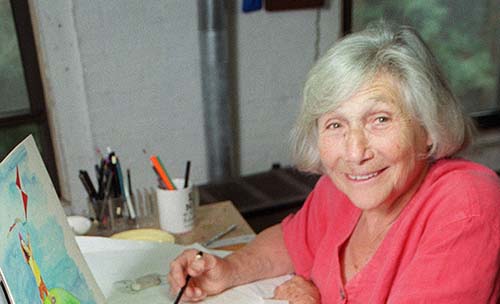