J. R. R. Tolkien spoke of the “cauldron of story.” If ever there were a “cauldron of illustra­tion,” William Joyce would be its master chef.

William Joyce, who resides in Louisiana, was educated at Southern Methodist University and sold paintings through galleries before discovering that children’s book illustration provided the ideal mode of expression for the ideas simmer­ing in his imagination. His creations are a subtle blend of a lifetime of accrued American interests and influences, and each offers something for nearly everyone’s tastes.

Every art aficionado will savor the rich, Edward Hopper-like paintings of Dinosaur Bob (1988). The minimalist text and expressive illus­trations recount the story of the family Lazardo and Bob, the dinosaur they befriend and bring home to New York from their safari in Africa. Add a few futuristic elements to the nostalgia of Dinosaur Bob and you have A Day with Wilbur Robinson (1990), in which a spaceship is parked on a lawn that, judging by the garb sported by those gracefully relaxing on it, one would think belonged to Gatsby. Wilbur’s eccentric extended family is a surrealist’s cup of fur: an uncle who blasts himself from a cannon, a robot, a cousin who floats with the aid of an antigravity device, and some yodeling frogs. The pokerfaced text relies on the visual punch lines to complete this story, in which Wilbur’s visiting friend joins in the family search for Grandfather’s missing teeth. After they are found — in a frog’s mouth — everyone celebrates with a pillow fight.

William Joyce, a fan of cartoons, television, and mov­ies (from science fiction and horror to classic), maintains that a career goal is to see one of his stories produced as a feature-length film. His enthusiasm for this medium is evident in Santa Calls (1993), which is the closest thing on paper to an animated film production and is the movie buff or fantasy lover’s dream. Spiced with mo­ments of Wild West adventure and bravado, the story includes a trip to the North Pole by Art Atchinson Aimesworth; his little sister, Esther; and his best friend Spaulding, a young Coman­che. Unbeknownst to Art and Spaulding, the ad­venture has been arranged by Santa in an effort to meet Esther’s only Christmas request: her brother’s friendship. The wish is fulfilled when Art rescues Esther from the terrible Dark Queen.

Another book of movie influence is Joyce’s first book as both author and illustrator, George Shrinks (1985), which Joyce has referred to as “King Kong in reverse.” A young boy, George, awakes to find himself about the size of a mouse. On his night table is a list of chores left for him by his parents, which he manages to complete with comic ingenuity.

Joyce has even concocted something for the sentimentalist. Bently and Egg (1992), rendered in gentle pastels, contains a playful use of lan­guage. The affectionate story of Bently, who is asked to egg-sit for his friend, Kack Kack the duck, turns to adventure when the egg, beauti­fully painted by Bently, is mistaken for an Easter egg and heisted. Bently, however, successfully tracks it down and saves the day, not to mention the egg.

William Joyce’s interests and influences blend so cre­atively in his work that, though detectable, they subconsciously meld to produce a completely original flavor. The results, the books that are “vintage Joyce,” present a talent that pleases a great variety of tastes and satiates even the most finicky connoisseur.

The Guardians of Childhood series 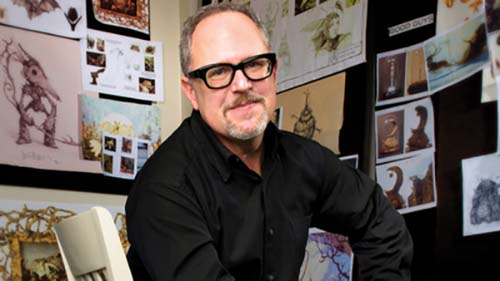