About his youth, the Russian-born Feodor Rojankovsky re­marked: “Two great events determined the course of my childhood, I was taken to the zoo and saw the most marvelous creatures on earth: bears, tigers, monkeys and reindeer; and, while my admiration was running high, I was given a set of color crayons.” Passionate about nature and drawing, Rojankovsky honed skills and techniques that allowed him to matriculate at the Moscow Fine Arts Academy in 1912. His studies ended two years later with military service in World War I, fol­lowed by the Russian Revolution, in which he first began to illustrate Russian children’s books.

After the war, Rojankovsky lived in Paris, where he worked for Domino Press, a small publishing firm owned by two American women. Daniel Boone (1931), Domino Press’s first publication, was America’s introduction to Rojankovsky’s talent as an illustrator. Emblazoned with brilliant colors and an impeccable sense of design, Daniel Boone was hailed by Anne Carroll Moore as “a unique first book in American history.” The spirit­ed lithographs spoke of Rojankovsky’s affinity for the American frontier, and critics lauded him as a fine col­orist With unusual color schemes that combined red, yellow, purple, and green, the illustrations in Daniel Boone conveyed a liveliness and a daring befitting their subject.

Feodor Rojankovsky emigrated to America in 1941, where he joined the Artists and Writers Guild, then headed by Georges Duplaix. One year later, Duplaix arranged with Ursula Nordstrom, the gifted Harper juveniles editor, to publish Rojankovsky’s Tall Book of Mother Goose (1942). Its elongated size—approximately five by twelve in­ches—ideal for presenting a great number of rhymes individually, each with its own illustration, was a new shape for “Mother Goose” books.

Also new was the look of Rojankovsky’s goose. Late nineteenth-century collections often depicted a quaint, grandmotherly woman and her goose seated among dainty, well-be­haved children, or a saccharine twosome in flight across the sky. Rojankovsky’s goose, cheery and colorful, was without its human counterpart, and the children he pic­tured were just as natural and homely as the ones next door. His penchant for highly vibrant colors injected a gaiety into his remarkably unsentimental drawings.

Feodor Rojankovsky also illustrated some of the first Golden Books for Duplaix, founder of that imprint. In more than twenty Golden Books, Rojankovsky used color, realistic animals, and lively children; all three became his trademarks. The Three Bears (1948), a Little Golden Book Classic still in print, displays his trademarks with exceptional distinction: a peasant cottage filled with a riot of colors and a great deal of Russian folk art; three husky, auburn bears; and one knavish Goldilocks whose braids are more red than blonde.

Equally respected in the trade-book field, Feodor Rojan­kovsky’s talent for observing and drawing nature en­abled him to craft several other noteworthy titles; his illustrations for editor John Langstaff’s Frog Went A-Courting (1955) earned him the Caldecott Medal in 1956. His choice of medium, crayon reinforced with pen-and-ink line, gave the drawings a rich grainy texture and con­veyed a characteristic childlike quality that flawlessly matched the simplicity and the cheerfulness of the Scot­tish children’s ballad.

When he died in 1970, Feodor Rojankovsky had illustrated more than one hundred children’s books; his flair for color, his vision of design, and his love of nature have greatly enriched American picture books. 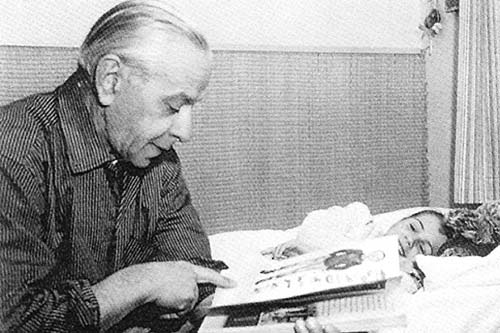