During the early 1900s paintings by Jessie Willcox Smith illustrated hand­some editions of children’s classics, including Little Women, The Water-Babies, At the Back of the North Wind, The Princess and the Goblin, Heidi, A Child’s Gar­den of Verses, and ’Twas the Night before Christmas.

Smith was a pupil of Howard Pyle, and, like many artists in the late 1880s, she began her career illustrat­ing stories in magazines. This led to her doing cover illustrations for Good Housekeeping, and until Nor­man Rockwell came along in more recent times with his paintings for The Saturday Evening Post, she was the only artist whose work was used consistently on the cover of a national magazine—over 180 paintings in fifteen consecutive years. Her subjects were children, playing, dreaming, doing—often in family and school scenes—and were presented for the most part without sentimentality. Her compositions, while less painterly than those of Mary Cassatt, conveyed the same realistic look at the tenderness of mother and child together.

Smith brought a strong sense of storytelling to her illustrations, and in Robert Louis Stevenson‘s Child’s Garden of Verses, the paintings of the little girl dressing by yellow candlelight, the small boy in bed with i his toy soldiers strewn about the counterpane, and. the child on the seaside rock contemplating his shadow are as evocative and memorable as the poems.

Memorable, too, are her depictions of the frightening Mrs. Bedonebyasyoudid and the comforting Mrs. Doasyouwouldbedoneby in The Water-Babies. In that book her decorative line drawings and colorful paintings of naked, potbel­lied babies innocently preceded Maurice Sendak’s later and more controversial nude babies. Smith pre­sented illustrations with simplicity, making the story’s actions and emotions clear, but her use of detail and texture enriched them just as it enhances fine paintings. In the frontispiece of A Child’s Book of Old Verses, for example, the little boy and girl saying grace at the table are flanked by a fine still life of jug, bread, and plate, while the curtained window behind them recalls those in Dutch paintings.

Jessie Willcox Smith was born in Philadelphia and in 1879 was studying to be a kindergarten teacher when a chance remark awakened her interest in art, and she dis­covered her natural ability for it. She then studied at the School for Design for Women, the Pennsylvania Acade­my of the Fine Arts, and the Drexel Institute of Arts and Sciences, all in Philadelphia. Looking today at the repro­duction of her work in various books, one senses that the inadequate processes of preparing and printing col­or plates before the use of offset lithography in chil­dren’s books in the 1920s failed to capture the freshness and brilliance of her original full-color oil paintings and watercolors. 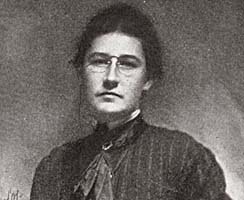