American illustrator and author, 1853—1911. Considered by many to be the father of children’s book illustration in America, Howard Pyle was developing his talents in the United States at the same time that Walter Crane, Randolph Caldecott, and Kate Greenaway were becoming influential in Eng­land.

Howard Pyle did not have the advantage of working with printer Edmund Evans, and thus most of his work for children was in black-and-white rather than in color. Moreover, while his illustrations were beautifully com­posed and designed, his pictures were often single- page or partial-page illustrations that supplemented a long text rather than double-page drawings that inter­acted with the words in relatively brief passages as did Crane’s, Caldecott’s, and Greenaway’s. Yet Pyle’s work was known and admired by these three, particularly Walter Crane, and Pyle contributed ideas and methods to the field of children’s book illustration that still have important influence today.

Howard Pyle was born and grew up in the Brandywine Valley in Wilmington, Delaware, and he remembered his childhood as an idyllic time that was centered on the wonderful old stone house he and his family lived in and on its garden, filled with profuse blooms and hid­den wonders. His mother, who loved books and art, was a great influence on him, and both parents encouraged his talent for art, finally agreeing that he should be trained at a small art school in Philadelphia rather than attend college.

Because of problems with his father’s leather busi­ness, Pyle spent several years after completing this train­ing helping out in the family business. But in 1876 his mother sent an essay and sketches he had done while on vacation on Chincoteague Island to Scribner’s Magazine, and the editor accepted the article for publication, sug­gesting that Pyle come to New York to illustrate and write for periodicals.

Once in New York Pyle sold his first painting to Harpers Weekly, a magazine that would continue to be an important venue for his work for many years. Indeed, the publisher of Harper’s Weekly had assembled an exceptional group of professionals who were knowledgeable about illustration and trained in the newest methods of printing, and the House of Harper became an informal training ground for Pyle to learn every facet of the publishing process.

During his time in New York Pyle became more and more convinced that he wanted to write and illustrate books for children. He drew upon his vivid childhood memories to contribute stories to St. Nicholas magazine, and he read and studied many of the old folktales that he’d loved as a child, extending his reading to include less familiar tales from many nations. These folktales and the romances of his boyhood would become the central core of his work over his lifetime; although he is primarily remembered today for his contributions to illustration, he was a writer of some skill. Indeed, he has been compared to Hans Christian Andersen in the way his unique voice and imagination shaped his traditional folklore and fantasy material.

After three years in New York, where he established himself with a reading public and a professional circle of fellow artists, Howard Pyle returned to Wilmington in 1879. He illustrated two short children’s books, Yankee Doodle (1881) and The Lady of Shallott (1881), both done in color in an experiment that sought to emulate the success of Edmund Evans’s work in England. American printers, however, did not have Evans’s skills, and the books were disappointing. Pyle returned to black-and-white illus­trations with The Merry Adventures of Robin Hood, which he wrote and designed himself. This book, pub­lished in 1883, is generally considered Pyle’s first chil­dren’s book.

Although the careful attention to book design that he insisted upon raised the cost of the book, eventually it was a great success. Even while he contin­ued to illustrate for magazines, Pyle’s best love seems to have been writing and illustrating for children, and he went on to do thirteen more books for this audience. Among these were Pepper and Salt (1886) and The Wonder Clock (1887), collections of stories in the folktale tradition, and Otto of the Silver Hand (1888) and four vol­umes of the King Arthur legends, which were longer romances.

Influenced by the Arts and Crafts movement in Eng­land, Pyle’s illustrations have the strong sense of line and composition that marked the work of many English artists of the same period, particularly Walter Crane. Yet Pyle became a master storyteller in pictures as well as words, and he never let his illustrations become fussy with decorative detail.

His first works were wood engravings, but when halftone methods of printing were introduced, in which a continuous-tone image can be created by using a pattern of dots of varying sizes (as in newspaper photographs), he was able to achieve finer distinctions in tonal values. In all of these he exhibited a carefully restrained sense of drawing and composition. His lines had great strength as well as flowing move­ment, and he used the white spaces to create a balance in his pictures, just as he used lines to convey drama. His characters were real people with distinct personali­ties and emotions, and his illustrations lent important energy to the long printed text.

Howard Pyle is notable not only for his contributions to chil­dren’s literature but also for his dedicated teaching of illustration. He was dissatisfied with the formal meth­ods of instruction then prevailing in most art schools, and he took a job teaching at Drexel Institute in Phila­delphia, where he could expound upon his strong views about art and illustration. His courses were in great demand, and later he started a school in his backyard in Wilmington, where he taught promising students for free, charging only room and board.

He believed that book illustration was the ground from which to pro­duce painters, and his experience in publishing was invaluable to students like N. C. Wyeth and Jessie Wilcox Smith, Even more important, perhaps, were his ideas on illustration, which were at odds with many of the beliefs of the day. He felt that artists needed, to get beyond the stiff figures of the studio life class and let their figures and scenes come from the imag­ination rather than from a frozen pose. Believing in the importance of the overall design of the book he helped his students learn how to integrate their illustrations into a whole. Pyle taught that the illustrate, role was to extend the text in personal ways rather than simply to reproduce what the text described, Through his many books and his teaching, Howard Pyle made contribution to children’s literature that is acknowl­edged by readers and artists to this day. 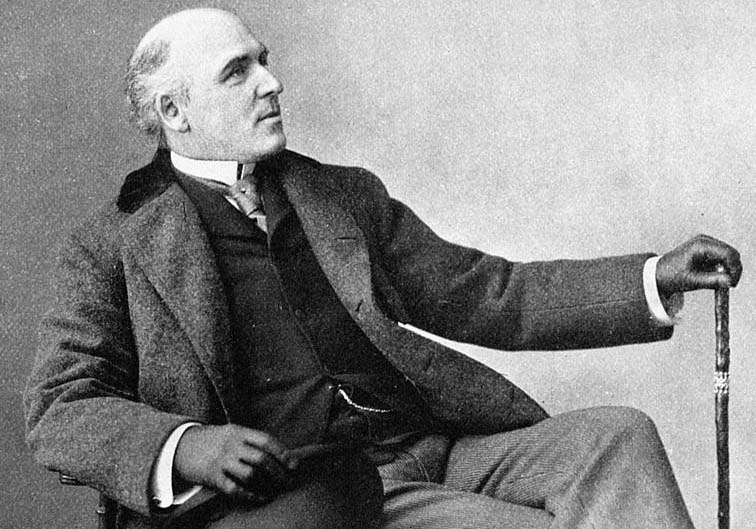