Arthur Rackham (1867 – 1939) was an English book illustrator. Rackham is widely regarded as one of the leading illustrators from the ‘Golden Age’ of British book illustration which encompassed the years from 1900 until the start of the First World War. During that period, there was a strong market for high quality illustrated books which typically were given as Christmas gifts.

Many of Rackham’s books were produced in a deluxe limited edition, often vellum bound and sometimes signed, as well as a larger, less ornately bound quarto ‘trade’ edition. This was often followed by a more modestly presented octavo edition in subsequent years for particularly popular books. He was one of the most prolific and most loved illustrator of children’s book. Many of his work are still in print today.

Goblin Market (composed in April 1859 and published in 1862) is a narrative poem by Christina Rossetti. The poem tells the story of Laura and Lizzie who are tempted with fruit by goblin merchants. In a letter to her publisher, Rossetti claimed that the poem, which is interpreted frequently as having features of remarkably sexual imagery, was not meant for children. However, in public Rossetti often stated that the poem was intended for children, and went on to write many children’s poems. When the poem appeared in her first volume of poetry, Goblin Market and Other Poems, it was illustrated by her brother, the Pre-Raphaelite Brotherhood artist Dante Gabriel Rossetti.

Goblin Market tells the adventures of two close sisters, Laura and Lizzie, with the river goblins.

Although the sisters seem to be quite young, they live by themselves in a house, and draw water every evening from a stream. As the poem begins, the sisters hear the calls of the goblin merchants selling their fantastic fruits in the twilight. On this evening, Laura, intrigued by their strangeness, lingers at the stream after her sister goes home. (Rossetti hints that the “goblin men” resemble animals with faces like wombats or cats, and with tails.) Longing for the goblin fruits but having no money, the impulsive Laura offers to pay a lock of her hair and “a tear more rare than pearl.”

Laura gorges on the delicious fruit in a sort of bacchic frenzy. Once finished, she returns home in an ecstatic trance, carrying one of the seeds. At home, Laura tells her sister of the delights she indulged in, but Lizzie is “full of wise upbraidings,” reminding Laura of Jeanie, another girl who partook of the goblin fruits, and then died at the beginning of winter after a long and pathetic decline. Strangely, no grass grows over Jeanie’s grave. Laura dismisses her sister’s worries, and plans to return the next night to get more fruits for herself and Lizzie. The sisters go to sleep in their shared bed.

The next day, as Laura and Lizzie go about their housework, Laura dreamily longs for the coming meeting with the goblins. That evening, however, as she listens at the stream, Laura discovers to her horror that, although her sister still hears the goblins’ chants and cries, she cannot.

Unable to buy more of the forbidden fruit, Laura sickens and pines for it. As winter approaches, she withers and ages unnaturally, too weak to do her chores. One day she remembers the saved seed and plants it, but nothing grows.

Months pass, and Lizzie realizes that Laura is wasting to death. Lizzie resolves to buy some of the goblin fruit for Laura. Carrying a silver penny, Lizzie goes down to the brook and is greeted warmly by the goblins, who invite her to dine. But, when the merchants realise that she has no intent to eat the fruit, and only intends to pay in silver, they attack, trying to feed her their fruits by force. Lizzie is drenched with the juice and pulp, but consumes none of it.

Lizzie escapes and runs home, but when the dying Laura eats the pulp and juice from her body, the taste repulses rather than satisfies her, and she undergoes a terrifying paroxysm.

By morning, however, Laura is fully restored to health. The last stanza attests that both Laura and Lizzie live to tell their children of the evils of the goblins’ fruits, and of the power of sisterly love. 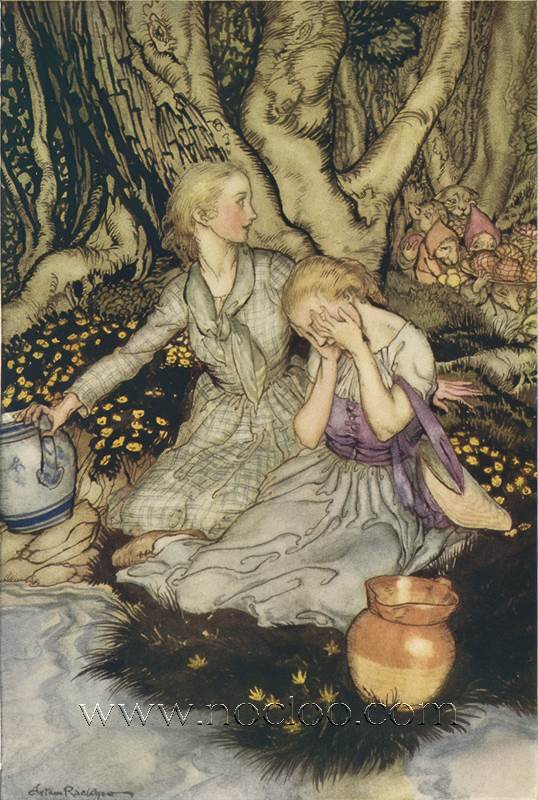