Betsy Lewin’s love of drawing emanates, she contends, from a childhood filled with books and reading. Her mother, a kindergarten teacher, read regularly from storybooks filled with pictures by Kate Greenaway, Randolph Caldecott, E. H. Shepard, and Beatrix Pot­ter, and Lewin was soon covering paper bags, napkins, and margins of her own books with self-styled renditions of animals and caricatures of friends and family. Before long, her creations included stories to match the images on the page.

While Betsy Lewin was encouraged by her parents in her artistic endeavors — she entered and won several art competitions and at age fourteen sold her first painting — they discouraged her from pursuing such an impractical career. Neverthe­less, she persevered, leaving her Pennsylvania home to attend Pratt Institute of Art in New York City. Following graduation, she found work as a greeting card designer and then began writing and illustrating stories for children’s magazines. Her first breakthrough in the chil­dren’s book field was Cat Count. A poem, which had originally appeared in Humpty Dumpty’s magazine, was expanded into a thirty-two-page picture book with black-and-white brush line drawings. Long out of print, the book was re-re­leased when Lewin agreed to enliven its appear­ance with full-color illustrations.

The title that brought Lewin her first wide­spread attention was Karen Ackerman’s Aramintas Paintbox (1990). Lewin’s frothy watercol­ors added warmth and appeal to the going-west tale. Lewin continues to provide illustrations for other author’s stories while also writing tales of her own. Often her subjects are the result of travels to far-flung places with her illustrator ­husband Ted Lewin. Booby Hatch (1995) is based on experiences in the Galapagos Islands, Chub- bo’s Pool (1998) on a visit to Botswana, What’s the Matter Habibi? (1997) on travels to Egypt and Morocco. Sometimes these journeys have culminated in producing a book together for the peripatetic husband and wife. Gorilla Walk (1999) for example, features Betsy’s field sketches alongside Ted’s watercolor illustrations of the huge magnificent beasts they saw in Uganda.

The loose strokes Betsy Lewin uses give her images a natural expression, energizing the page, and her smoothly integrated colors add gentleness. Humor filters through most of the artist’s work. In 2000, she teamed with author Doreen Cronin to create Click Clack Moo: Cows That Type. This hilarious spoof on modern technology and la­bor relations received a Caldecott Honor award. Farmer Brown’s cows’ unusual typing skills set off a tale that rings with hilarity and ends with an unexpected — and even funnier — twist. Betsy Lewin has also collaborated with Mary Skillings Prigger in two jocular stories — Aunt Minnie

McGranahan (1999) and Aunt Minnie and the Twister (2002) — about an irrepressible spinster. Whether illustrating a lively schoolyard story (Recess Mess, 1996, written by Grace MacCarone) or collaborating with Elizabeth Win­throp to create a book about a dancing pig (Dumpy La Rue, 2001), Betsy Lewin can always find the humor in a story. 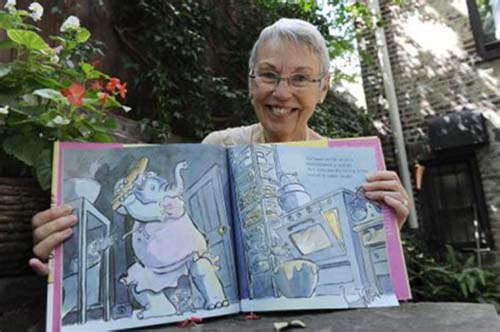